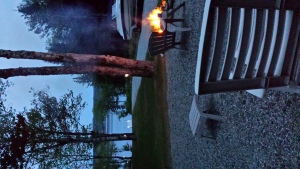 With broken hearts we the family of Donald “Eric” Warren announce his sudden passing on August 8, 2020 at the Cape Breton Regional Hospital. Born in Glace Bay he was a son of the late Dorman and Winnie (Dawe) Warren. He is survived by his wife Kim (Ripley); sons Jason (Sarah), Alberta; grandchildren Aliyah and Alex, who were Poppy’s pride and joy, and Allen (Rachel), Ontario; siblings Sharon (Ken) Tilley; Beavon (Debbie); Doreen (late Jack) Bellamy; Diane (Angus) Kinloch; Fred (Patsy); as well as several nieces, nephews and cousins (especially Debby, Susan and Joan) who he thought of as sisters.

Cremation has taken place and no service is planned at this time. Donations in Eric’s memory may be made to a charity of one’s choice.

Special thanks to the staff of EHS; ER; and 4-C at the Cape Breton Regional Hospital as well as all the doctors who contributed to his care; friends and family – near and far for all their support during this difficult time.

To send flowers to the family or plant a tree in memory of Donald "Eric" Warren, please visit our floral store.

You can still show your support by sending flowers directly to the family, or by planting a memorial tree in the memory of Donald "Eric" Warren
Share a memory
© 2020 Forest Haven Memorial Gardens. All Rights Reserved. Funeral Home website by CFS & TA | Terms of Use | Privacy Policy