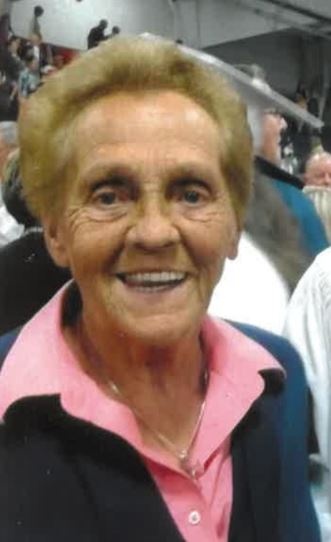 Well, Mom bought her final lottery ticket on November 18 th at age 82. She passed away at the An Calla
Palliative Care Unit of the Cape Breton Regional Hospital due to complications from COPD.
Cape Breton has lost another “character”. Mom had a knack for extracting information from everyone
she met. She would know everyone’s name, where they came from, their father’s name and lots of
other personal information. The police could have used her as an interrogator. To their dismay, she
then would share this with her family. It could be the nurse, pharmacist, taxi driver, the store clerk,
mom talked to everyone. We used to marvel at how she would know so much about people. Mom
loved going to Walmart and more recently, Giant Tiger. No excuse was ever needed to go shopping. In
her words, she just needed to get out - $200 later and a cart full of stuff. If she had a dime, she had to
spend it. Mom had the local taxi drivers on speed dial for Walmart, the doctor’s office and the Ashby
Legion. She also had a knack for losing things whether it be her hearing aids or false teeth. We assume
the false teeth were lost in a taxi so apologies to anyone who got in a taxi and was bitten.
Mom was known to be a hard worker. Whether it was filling bags of coal as a teen and dragging them to
wherever or putting up a fence pretty much by herself at the family home, she never shied away from
hard work. She was a Mrs. Fix It. She would work on projects from dawn until dusk, never taking a
break. Red Green wasn’t the only person who knew a million uses for duct tape, a hammer, some nails
and a few pieces of wood. Of course the quality of the work was often suspect, and we seriously
considered entering her name into the TV show Canada’s Worst Handyman. Our late sister Paula
immortalized some of Mom’s more creative pieces in a popular Facebook Posting of Mom’s DIY’s.
Always a tomboy, mom didn’t pursue feminine things, but would still get offended if anyone called her
Sir. She never wore makeup or feminine clothes. Her excuse was that women’s clothes never fit her
right. Mom was known to make some loud fashion statements over the years. If everything didn’t have
pockets, she didn’t want it. You always need pockets for Kleenex…
Mom loved to clean. We used to wonder if she had shares in Javex as it was a noun and verb in our
household. According to Mom, a house wasn’t clean without it. That lovely aroma always hit you when
you entered the house. She ruined many a piece of clothing with Javex, whether it was hers or the
family’s. She also loved to paint. She painted everything whether it needed it or not, including things
that should never be painted like the rubber mat in the tub. Like Javex, extra paint could be seen
everywhere, especially on her clothes. No surprise, Paint by Numbers were a favourite pastime.
Mom hated cooking. She only cooked because she had to at times, but there were a few things that she
did enjoy making. Mom’s best cooking talent was her homemade bread. It was truly delicious. We all
have fond memories of that. Mom stopped making it when she could no longer get yeast cakes as those
packages of dry yeast were just not the same. She had us searching everywhere for the cakes but alas,
there was none to be found.
Another company Mom could have had shares in was Pepsi. She loved her Pepsi. In later years, she
switched to Diet Pepsi and always wondered why her stomach didn’t feel well. If Diet Pepsi was in the
Walmart flyer, that was a great excuse to get out.

Mom liked to tell stories of her past and a few trips she was on. She and Dad would frequently go to
Montreal to visit their friends Bob and Ingrid. The trips to the cottage were legendary. Bob also came
to Cape Breton for the “lobster do’s” every June for over 30 years. One of Mom’s many stories was
from her trip to Spain and Morocco in 1985. That provided stories about the “naked” people on the
beach, the snakes, camels, and food, etc. for many years.
Mom always regretted that she didn’t get a formal education but instilled the importance of education
in her children. For the girls, it was always about being independent and learning to rely on yourself.
For the boys, it was knowing how to do things around the house like ironing clothes. She was proud of
her children’s and grandchildren’s accomplishments. There were always numerous pictures of the
family on every wall in the house, including those now dated graduation pictures we’d sooner forget.
Mom’s colourful personality was big and lack of filter often made you shake your head but she was a
kind person. Through the years, Mom had a lot of health issues, many of which came from hard living.
One of Mom’s favourite people was Dr. Carol Critchley or just Critchley as mom called her. Dr. Critchley
saw Mom for more than 40 years. Mom was a challenge as she was never good at taking advice,
especially where her health was concerned.
A heavy smoker since her teens, Mom would continually try to quit, often telling people she quit when
she never quite got there. Once Febreeze became available, mom sprayed it everywhere including on
herself to mask cigarette smoke. In the last two years, the result of that smoking started to take its toll
with COPD and eventually lung cancer. Mom accepted her fate with the old shrug of the shoulders and
cryptic comment. It was her time.
Joan was the daughter of the late Neil and Joyce Kelly of Glace Bay. She was predeceased by her
husband Ray and daughter Paula as well as sisters Sr. Marie, Elizabeth, Elvina and brothers Jim and
Gerald. She is survived by daughter Helen, sons Raymond (Debbie) and Robert as well as grandchildren,
Matthew and Breagh Gromick and Mark and Colin (Brian) Graham and Amanda (Scott) Mackenzie and
great grandchildren, Makayla and Keagan MacKenzie. She is also survived by sisters Vina Noseworthy
and Pat Kelly.
There is no formal service for Joan. An open house will be held at Joan’s residence on 50 Duffle Drive,
Mira Road from 3 – 6pm on Thursday, November 21 st . Cremation has taken place and family burial will
take place at a later date. Donations can be made to the Circle of Care Cape Breton Campaign for a new
hospice or to the new Cape Breton Cancer Centre Campaign.

To order memorial trees or send flowers to the family in memory of Joan Graham, please visit our flower store.

Gathering of Family and Friends