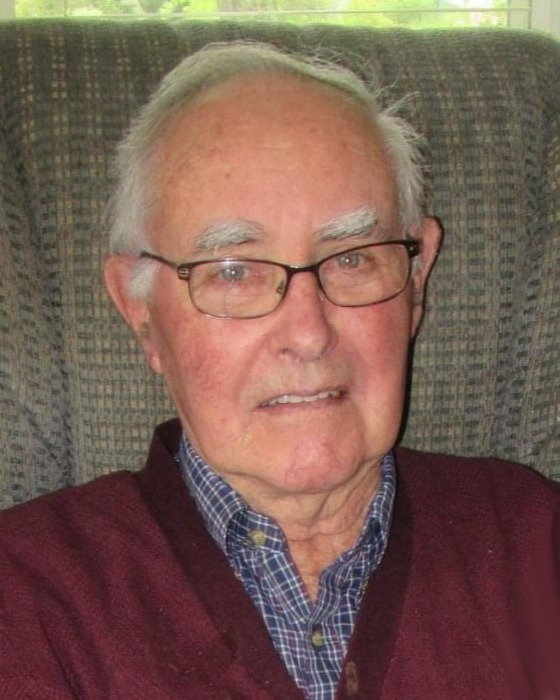 With heavy hearts we announce the peaceful passing of our dad, at home, surrounded by his four children.  George Clarence Crowell, 90, of Glacé Bay, departed to join his loving wife, Jean, on Thursday, October 13. Born June 8, 1932, in Glacé Bay, he was the son of the late Wilfred and Hattie (Nickerson) Crowell. George had a long and love filled life that anyone would be lucky to have. He grew up with many siblings whom he remained close to his entire life. George spent his life with his love, Jean, at his side through all that life had to throw at them, hard times and joy. Together they had four children, nine grandchildren, ten great grandchildren, and many nieces and nephews with whom they shared many happy memories. George spent his working years with CN Express, first as a delivery/truck driver and then as office manager. George led an active life until the last few years - fly/salmon fishing in North River and Middle River, x-country skiing, and hiking. He also enjoyed woodworking, bird watching, gardening, berry picking, tying flies, stained glass, to name a few. George knew the eastern part of Cape Breton like the back of his hand, with his favourite place being on the Mira at Beth and Billy's bungalow with all his family. George was easy going, patient, a great teacher, quiet, and a true gentleman and will be remembered that way by those he loved and who loved him dearly in return. George is survived by his son David (Julie), Glacé Bay; daughters Beverly, Glacé Bay, Nancy (Robbie) Harris, Glacé Bay, Sandra (Sasha Tomin) Woodford, Liverpool; brother Donald (Joyce), Windsor; brothers-in-law Ray McNabb, Sydney River, Billy Noseworthy, Sydney, Alan Baillie, Glacé Bay; sisters-in-law Isabelle Crowell, Cornerbrook, Joan Spencer, Mississauga. Besides his parents, George was predeceased by his wife of 67 years, Jean (Spencer); brothers Roy and Earl; sisters Vivian (Morris), Phyllis (Johnson), Audrey (Mahoney), Shirley (McNabb), and Beth (Noseworthy); brothers-in-law George Morris, Tom Johnson, Willie Mahoney, Arthur Spencer, and Bobby Spencer; sister-in-law Wilma (Baillie). The family would like to thank Palliative Care, VON, Golden Girls, Ferguson's PharmaChoice, and Dr. Lawand for their excellent care and support of the family. Cremation has taken place. A celebration of life will be held at a later date. To leave words of condolences for the family, please visit www.foresthaven.ca. May he be at peace, knowing that he was deeply loved and forever missed.
To order memorial trees or send flowers to the family in memory of George Clarence Crowell, please visit our flower store.