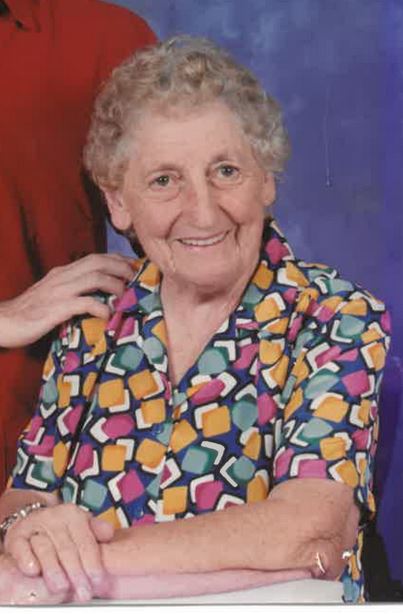 Blanche passed away peacefully on Wednesday night with family by her side at Seaview Manor. She was 101 years old.

Born in Glace Bay to the late Clarence and Cerina (Gracie) Cochrane, she was the third of 14 siblings. Blanche married Patrick Burrows and together had three children. Patrick died in 1960. Blanche worked most of her life raising her family, but also worked at the Pop Mart, and operated a small store from her home on Lake Road. She enjoyed maintaining a garden, providing fresh, home grown food for her family. She was very good at filling containers with the wild blueberries, strawberries, and blackberries that grew not far from her home, and made delicious jams and muffins. The wonderful smells of homemade bread and molasses cookies often filled the house when she was cooking. She regularly attended mass at St. Anthony's church, was a member of the Red Hat Society, the Glace Bay Art Group, and was a long-time member of TOPS, who she travelled with to Hawaii in the early 1980s. She also took a bus tour across Canada. Perhaps her most notable activity was skating, which she participated in until the age of 96. She was a regular at the rink in Glace Bay, first at the Miner's Form, then the BayPlex.  At the age of 70 she obtained her driver's licence, for which one reason was to help her grandsons with their paper routes. She treated her grandchildren as if they were her own , and she will be dearly missed.

Besides her parents and husband, Blanche was predeceased by her sisters Florence "Vi", Stella, Claire and Mildred, brothers, Ernie, John, Melvin, and Joe, children George and Dorothy, and grandson Ian.

The family would like to thank the staff of Seaview Manor. Donations can be made in Blanche's memory to the charity of your choosing.

Cremation has taken place at Forest Haven Memorial Gardens. A graveside service will take place at St. Anthony's cemetery on Tuesday, August 25th, at 11am.

Expressions of sympathy may be made by selecting the "Condolences" tab above.

To order memorial trees or send flowers to the family in memory of Blanche Burrows, please visit our flower store.