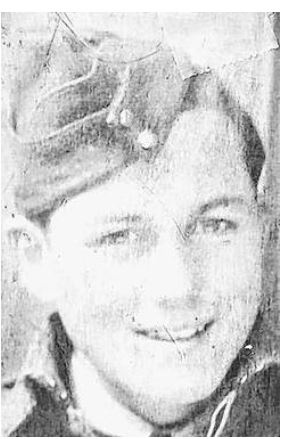 KEOUGH, Andrew 'Buddy' It is with great sadness that we announce the passing of Andrew 'Buddy' Keough, 95, on September 13, 2019 in Sydney, NS. Born in Sydney on October 11, 1923 Andrew was the son of the late Andrew and Mary Anne (MacRae) Keough. He served in the Military Service Corp in WWII, and then worked at the Steel Plant in many departments over 42 years, last in the Blooming Mill Pits as a pipefitter. He and his wife Evelyn raised their family at 330 Lingan Rd. in Sydney. He enjoyed walking nightly at the track for over 25 years. He had also enjoyed skating, many years of family camping at Piper’s Campground, and regular drives with his wife to many places across Cape Breton Island, especially their favorite spot, Baddeck. Andrew was predeceased by his wife of 71 years, Evelyn (Gadd); sisters, Helen ‘Tootsie’ Dwyer, Evelyn Murphy, Rita Costello, Mary ‘Tillie’ Campbell, Lorraine Brookman, Rose Duff, Bernice Campbell, Mildred Hooper, and brother, Maurice. Andrew is survived by sons, Melvin (Diana), Bobby (Carol), Glenn (Susan); daughter, Karen (Stuart) MacDonald; brother, David (Diane); seven grandchildren, Mark (Ruth), New Brunswick, Tara (Billy), Sydney, Krista (Andrew), Halifax, Jason, Port Hawkesbury, Tammy (Mike) Grenier, Alberta, CherylAnn (Chris) LaFosse, Newfoundland and Brittany, Antigonish. Also, seven great-grandchildren, Dean, Bree and Drew, New Brunswick, Ben and Amelia, Alberta, Alexander and Madison, Newfoundland. He is also survived by many nieces and nephews. Andrew had resided at Taigh Na Mara nursing home in Glace Bay for almost five years. The family is forever grateful to the staff at Taigh Na Mara for their tremendous care and compassion they showed to our Dad and for caring for our Dad as if he was one of their own. There will be no visitation. A service will be held at Holy Redeemer Church, Whitney Pier, officiated by nephew Father Paul Murply, on Wednesday, September 18, at 10 a.m. A light lunch will be served at the Pier Community Funeral Home following the service, with interment to follow at Forest Haven. In lieu of flower, donations may be made to any charity of your choice.

To order memorial trees or send flowers to the family in memory of Andrew (Buddy) Keough, please visit our flower store.