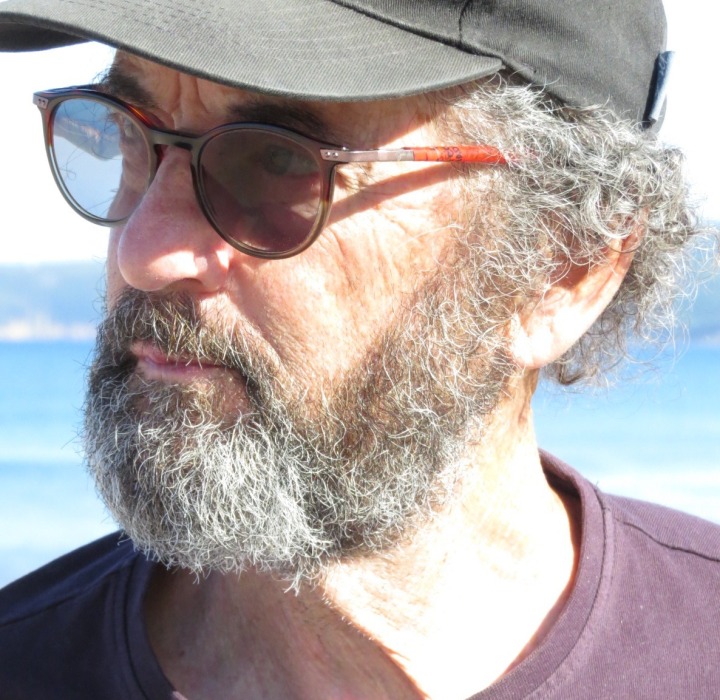 Andrew Danson Danushevsky, Canadian photographer, of Port Hood, Cape Breton, and Change Islands, Nfld., was a whirlwind of creative energy. A seer, a seeker, a writer, musician and artist. An educator, author, curator. A man who lived life to the fullest and forged his own unique path.

Born in Bournemouth, England on January 12, 1945, Andrew was the son of Bert Danson and Dot Markowitz who met in England where Bert was in the Royal Canadian Air Force and Dot was in the British Women’s Auxiliary during WWII.

Andrew’s voyage across the Atlantic at 8 months of age was the beginning of a life of travel and adventure. Growing up in Toronto, Andrew’s formative experiences were at his parents’ summer camp, Camp Winnebagoe, in Muskoka. There his siblings and cousins spent idyllic summers together with 300 other campers, exploring nature, canoeing, swimming, water skiing, sailing. Singing songs. Gathering. It was there also that Andrew came into contact with the nearby local farmers. This was the  beginning of Andrew’s curiosity about people from other backgrounds, particularly people planted on the earth. These early discoveries greatly influenced the direction his photographic explorations would lead him in later life.

These explorations began when Andrew was still in his twenties. Starting in his home town of Toronto, Andrew created a body of work called Toronto Portraits. Often just meeting interesting and diverse people on the street, Andrew would be invited into their homes to photograph them. Such was his charisma, such was the time. His relentless energy to explore this world, its people, its landscapes, its inner workings,  led him eventually back to Europe, to Africa, China, Cuba, Jamaica, creating bodies of work in each of these locations.

Actively exhibiting since 1973, Andrew has been featured in over 50 exhibitions. His photographs are collected by museums and art galleries in Canada, the U.S., France, Germany, Belgium and Scotland. He is the recipient of awards from the Canadian Department of Foreign Affairs, Secretary of State, the Canada Council and the Government of Nova Scotia. He has taught in the photography programs of Humber College, The Centre for Creative Communications (Toronto) and at NSCAD University (Halifax). He has lectured at the Art Gallery of Ontario, Ryerson University, University of Toronto, Hart House, Emily Carr College of Art and Design (Vancouver), Vilnius fine Arts Academy (Lithuania)  Memorial University (Newfoundland) and at the Galerie Vaclav Spala, Prague, Czech Republic.

On the 100th anniversary of the sinking of the Titanic andrew mounted a major installation at the Maritime of the Atlantic in Halifax.

Published works: Unofficial Portraits (Doubleday 1987), a Canadian bestseller, consisting of politicians photographing themselves in their offices.

Face Kao , Portraits of Japanese Canadians interned by the Government of Canada during WWII.

Andrew was a man of passion and focus, an environmentalist, activist, friend.

Having bought property in Newfoundland in the 1970’s, Andrew developed a deep love of the Island and its people. Eventually settling on Change Islands (CI) in the early 2000’s, Andrew quickly became a popular neighbour and friend of many of the Islanders. Out of these relationships came a yet to be published book of portraits called Time Sure Not Be Long Gone. While summering on CI, which became his spiritual home, Andrew was a member of the Fisherman’s Committee, was instrumental in organizing islanders to have a new wharf built, rallied to have a full time nurse on the island and participated in multi-year effort of the Manolis L. Committee to successfully have hazardous oil removed from the derelict sunken ship off shore of Change Islands. Being a lifelong teacher he also offered classes in yoga and qigong with his partner, Johanna Padelt.

He was man of wisdom and spirituality who lived deeply grounded and breathed optimism.

“Life is beautiful and I’ve been blessed with energy from the earth and the cosmos and that can never change. It was always about being there.”

Having lived on Cape Breton Island since 2016,  Andrew died in the palliative care unit of the Inverness County Regional Hospital. He chose medical assistance in dying after two recent unsuccessful cancer surgeries. He wished people to know that he was glad to live in a country which made this possible and be in the care of wonderful doctors whose compassion created a peaceful end to his life.

Andrew Danson leaves behind his loving partner, Johanna Padelt. His son, Akira, and daughter in-law Stephanie Danson, grandsons Nathaniel and Elliot, of Toronto. His sister Wendy and brother in-law David. Brother Rob and sister in-law Janice. Sister Sue-Ellen and brother in-law Barry. Predeceased by his parents Bert and Dot Danson. He will be missed by his niece and nephews, and all the Danson and Farber cousins.

To order memorial trees or send flowers to the family in memory of Andrew Danson Danushevsky, please visit our flower store.